The craft of your most valuable asset, people
2.

You've signed the contract. It's your new hire's first day.

Now is the moment to keep the promise made during the hiring process about what your company represents. It's also time to make sure the new employee is aligned on his or her role and expected outcomes.

These crucial first months, that appear as normal workdays to existing employees, represent a significant milestone in this fresh eyed new hire's career.

Companies lose 17% of their new hires within the first three months on average. So, don't just usher them to their desk and leave them to it. Displaying genuine excitement for the new people on your team creates a sense of being valued that carries on into the rest of their time with you.

Here's some points to remember to stay aligned from day one and avoid losing people before they even get started.

Give them time to set up

Depending on your scale, it can take up to two weeks, a month, or according to HBR, even a year to get new employees fully up to speed.

Of course, you want your new hires to be successful as fast as possible, but the more time you set up front as a dedicated learning period, the more you'll be set up for success in the long term by not overwhelming them, which can lead to churn.

Within two weeks, new hires need to understand the big picture of 360 Learning. It's intense and fast on purpose so that the first two weeks are only focused on catching up on topics and getting operational as fast as possible. Every team creates an onboarding track for the new hire.

Give them your time

As well as giving them time to set up, take time yourself to set expectations with them early. Write down their roles and outcomes together. Make sure you and your new hire are aligned from the first day, and check in regularly to make sure it stays that way.

Encourage others on the team to give their time to onboard new hires. Assign buddies to each new hire to be reference points on the company's values, vision and more.

At Buffer, each new hire is assigned a Role Buddy and a Culture Buddy. Here's how they present the buddy system to all new hires:

Have an onboarding checklist for each hire

Have a checklist for all new employees to follow when they first join. Include tools, accounts to set up, people to talk to, policies and processes to learn. If you're a product company, make sure they use the product.

Don't treat everyone the same, each employee should have a different journey. A well thought out checklist can be a fun, engaging and clear way to make sure employees get up to speed.

At Buffer, we used to have a 6-week Bootcamp Onboarding program from which new hires would graduate and become official Buffer employees. We have totally shifted away from this. New hires are considered employees from day one and their onboarding phase lasts over 90 days.

There's fine balance between making sure your new hires get ramped up quickly but also that they feel safe and not stressed about starting a new job. Our bootcamp made it unnecessarily feel like candidates were on trial.

You can start with our onboarding checklist template and create your own version for each new hire.

Help them to learn by doing

At Slite, we get new designers and developers to ship a (very small) feature within their first week. This helps new hires interact with the product process in a realistic fashion, rather than in abstracted training manual.

We get people hands on really quickly. This approach helps to minimize the stress people have when they join.

Newcomers are able to learn about the culture as they contribute through small tasks. This provides some early wins which are important as they socialize in the team and develop their own pace.

On top of a specific onboarding guide, checklist, and an employee handbook for the new hire, have a clean, well structured general company knowledge base that codifies your values, processes, and policies and gives your new recruits access to it as soon as possible.

This way, they can answer the majority of the questions they have by themselves as they arise. This will feed their curiosity without having to feel like they're interrupting people for every question, and give them a sense of unlimited autonomy over their own learning.

You can never be too explicit. Having access to a lot of information can be overwhelming but it’s better than leaving a lot of room for doubt.

Especially in a remote company, newcomers are more dependent on their mentors and teammates, so being able to access documentation and past conversations can help bridge the knowledge gap. This is also a great way to identify knowledge or practices within the company that have gone undocumented but should be shared for everyone’s benefit.

If you're looking for inspiration, Startup Bibles is a great collection of many other startups' approach to the centralized wiki.

The craft of your most valuable asset, people
3.

Say it before it's too late

Slite helps your team collect their knowledge and stay on the same page across time and space. 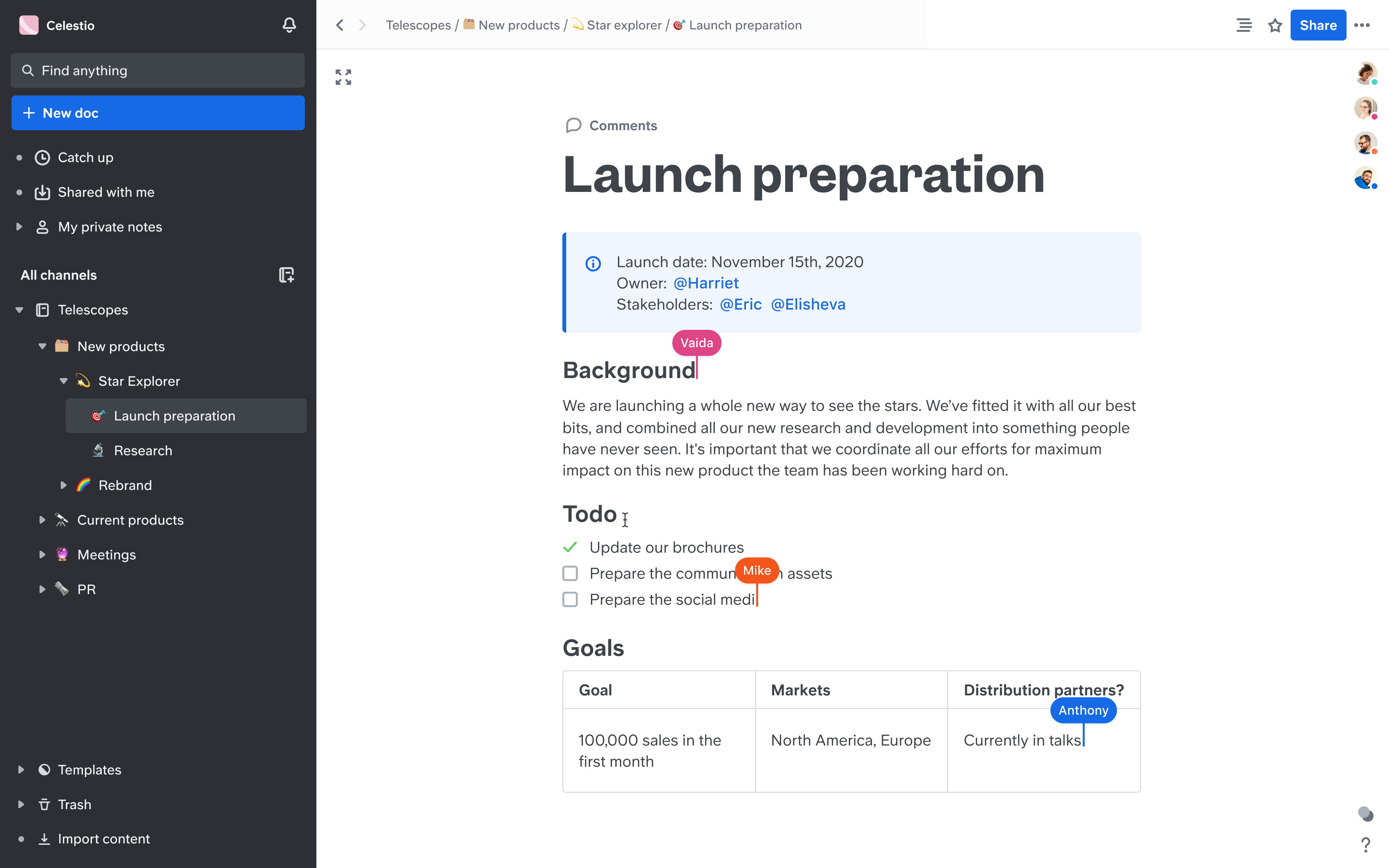